Hazardous and classified locations are essentially the same. They can be defined as locations where fire or explosion hazards may exist due to the presence of flammable gases or vapors, flammable liquids, combustible dusts and ignitable fibres or flyings.

When an area is “classified” hazardous gases, vapors or dust have been identified and put in a specific Class, Division / (IEC) Zone and Group.

Once classified, only industrial telephone communications equipment which is approved for that Class, Division and Group can be installed and used.

The European CENELEC and (IEC) system was introduced to North America in 1966 and was adopted by the CEC in 1998 to promote harmonization with international standards. In the U.S. and Canada it is permitted to apply its system of classification of hazardous locations to Class l locations. It is now part of the NEC® (article 505) and CE Code (section 18).

Guardian Telecom designs and manufactures individual products that adhere to the high standards of NEC®/CEC, CENELEC and IEC. They have been tested and approved or certified by recognized third party testing agencies. While some countries do not have a set of regulations in force they can rely on products that adhere to these classification systems to meet their needs for safety, quality and reliability.

After “Classes/Divisions” are established they are then broken down into “Groups”.

Class III
Areas made hazardous by the presence of easily ignitable fibres or flyings, but which are not likely to be in suspension in the air in quantities that are sufficient to ignite.
Division 1 & 2: Cotton lint, flax, rayon.

*While the NEC®/CE and IEC classification systems are similar they are not identical and care should be taken to avoid confusing Group ll and Class ll. At this time the NEC® or CE Code does not recognize any CENELEC or IEC dust classifications. NEC® – National Electrical Code is a registered trademark.

The content in this section presents general information describing the classification systems that Guardian Telecom designs, manufactures and markets telephone and paging system products to, including ATEX, NEC, CEC and IEC.
All information is for general reference purposes only. All applicable local and national regulations and practices concerning Explosion Proof and Hazardous Area communications equipment must be strictly followed and adhered to.
For detailed information refer to published documents on hazardous location definitions and installation requirements presented by: 1) NEC®, 2) CEC Canadian Electrical Code, 3) IEC 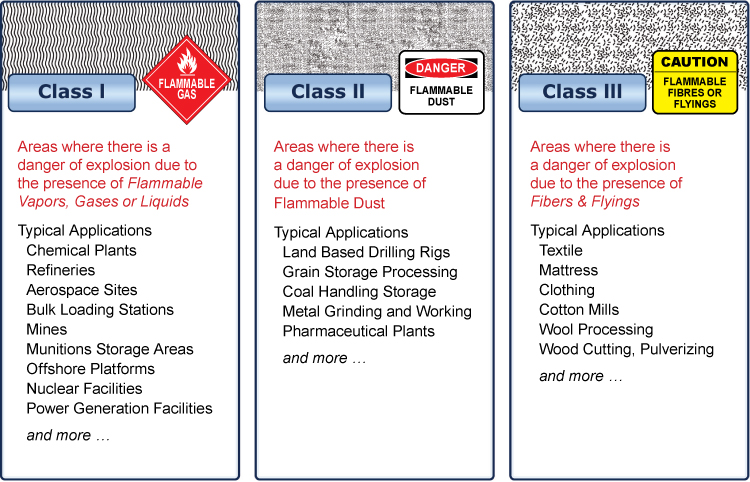 PRODUCTS / MARKETS / CUSTOM SOLUTIONS / WHERE TO BUY / RESOURCES / ABOUT / CONTACT

We're not around right now. But you can send us an email and we'll get back to you, asap.